As much as we are thoroughly enjoying our time here in Bali, Indonesia, it’s sadly coming to an end. We are moving on to more adventures and ready to see what comes next. ….well…we really just need money. But a new job in a new country is very exciting! We have spent some time sorting everything out that we need to do when we arrive in Auckland. We have farm clothes to buy and have to get ourselves up north to the winery.

But first…we are now in beautiful, spiritual Ubud. How can one come to Bali and not go to Ubud! And furthermore, how can one come to Ubud and not do yoga?! So that is what has taken up most of our time here; yoga. I’ll elaborate more on that later.

We spent our last few days in Amed pretty much exactly how we spent the first few days (and all the days in between as well) …relaxing. The last three days were actually fairly sunny all day! That was really nice, we hadn’t had that yet so it was nice to bask in the sunlight a little bit. We relaxed on the balcony, went for a couple swims, ate some really good food …and also enjoyed Valentines Day and celebrated being together for 2 years! Now, I wouldn’t say that Amed is the most romantic or enchanting place to celebrate February 14th. Its pretty much just one street with restaurants and little shops and one spa near us. So we had a nice simple relaxing day together. We went out to the water for bit while Robin went snorkelling off the shore (and I watched from the safety of the beach), then we had some time doing a little bit of a yoga practice. To relax and rejuvenate after that we hit the spa for a bit and each got a massage. Well I got a back and shoulders massage….Robin pretty much just got Aloe poured on him and laid there untouched for 45 minutes. But they were both nice and relaxing. Later on, we went to dinner. We had decided the day before to order Chicken Tutu, a whole chicken that takes 24 hours to cook. So we ordered that the day before and enjoyed that for our Valentines dinner!

After dinner we went to a reggae bar down the street for some live music and drinks. We had gone there a few days earlier and had such a great time, and they just so happened to be having a singer from Jakarta come to perform that night. It was great fun. As soon as we walked in we sat down with some other travellers, a couple from Germany and two from Canada!!! I was so excited. I would have to say that in all of our travels, we’ve met way less Canadians than I thought we would have, so I was really excited to meet and talk with them. We had such a fun night, drinking arak and dancing and chatting; and I even got my tarot cards read by one of the sweet Canadians!! It was such a great way to end our special day. 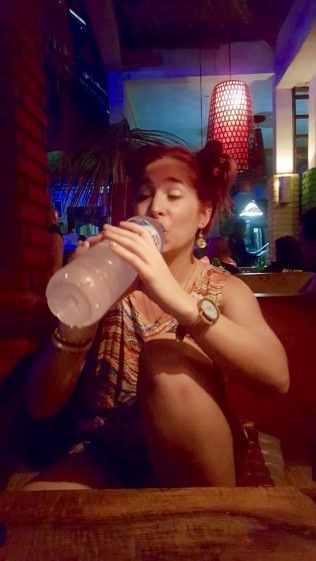 Ensuring there will be no hangover tomorrow.

Chicken Tutu, head and all!

The next day was spent in ultimate relaxation mode. And then just as if those 9 days flew by, it was time to pack up our bags again and leave Amed! We did have a nice time but I was really excited to move on to the next place…..Ubud! I have been so excited to come here ever since we started planning this part of our trip to Bali, how can you not be completely enchanted when coming to a place so lush and spiritual?! Ubud is known as Bali’s healthiest town (don’t worry, we found an Italian place for pizza pretty darn quickly) and part of that is obviously yoga. 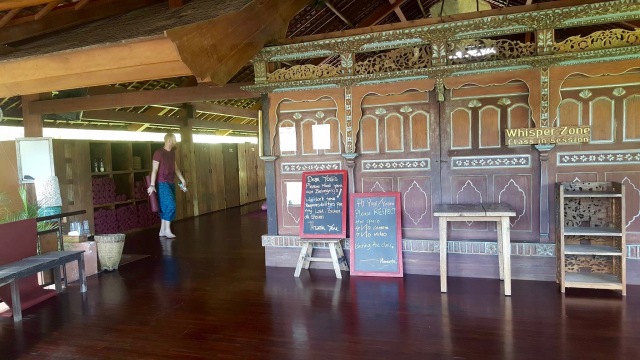 As part of my Valentines day/Anniversary gift, Robin told me he would buy us each 5 classes of yoga at The Yoga Barn, so that’s what we have been busy doing together. We will have spent 4 full days here so that’s one class a day and two classes on one of those days. We have had 4 classes so far, one more tomorrow, and we are just loving it. I’ll write a full blog post on our experience at the Yoga Barn and about the classes we took and things.

One of my other favourite things so far about Ubud has to be our Homestay! Warini Homestay….it is absolutely beautiful. 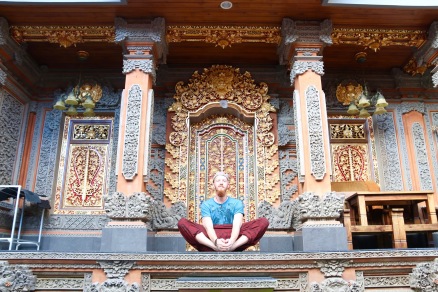 All of the rooms look like the most beautiful Balinese style temples! It’s such an amazing little compound with fish ponds, fountains and statues everywhere. It such a quiet, relaxing place yet its right in the centre of Ubud! It is just off the main road, just enough so you hear no traffic but close enough to walk everywhere. 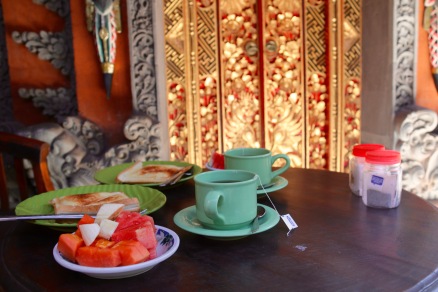 Our yummy breaky at our hotel!

A delicious chicken salad in a pineapple. 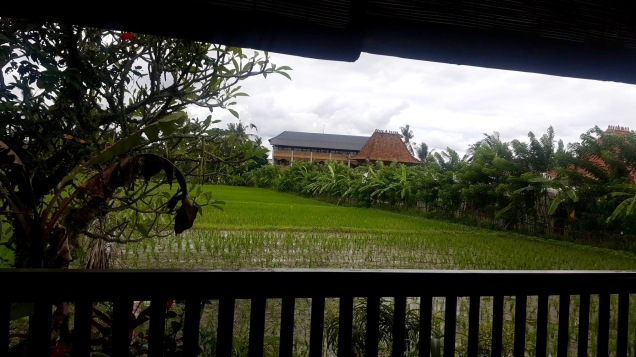 The view from one of the restaurants – rice paddies!

We were also only about a 15 minute walk from the Ubud Medical Clinic, and that is important here because we actually had to make a little trip there. Not to freak anyone out of course…but we have been travelling for a long time now, and we know that there is always a possibility for sickness or infection etc. when coming to different countries. About a week and a half ago -in Amed- we noticed that Robin just had some redness on his arm and it looked like blisters that you can get from being sunburned. So we just summed it up to being that. He got a few more on his chest and they were looking quite blister-y, but he had no other pain anywhere else. When we got to Ubud, I noticed that I now had a couple of the same red looking blisters on my leg, so we went to the clinic immediately. It obviously wasn’t a sun blister if it was contagious.

So anyway, after Robin had a little blood-work done, the doctor confirmed that it was just a form of dermatitis. We were really happy with the outcome because before the blood-test, the doctor said she thought it looked like a bacterial infection which would mean that we’d both have to go on anti-biotics. But, lucky for us its just a little rash that will heal on its own.

So…it does happen. People get sick while travelling, it happens to the best of us. You just have to go to the clinic, get it looked after and then slap it on the travel insurance that we are paying a pretty penny for (for just this kind of thing!).

So all is well, and we are enjoying our last day here in Ubud but also excitedly getting ready for the next adventure. Next time we check in we will be in beautiful New Zealand!