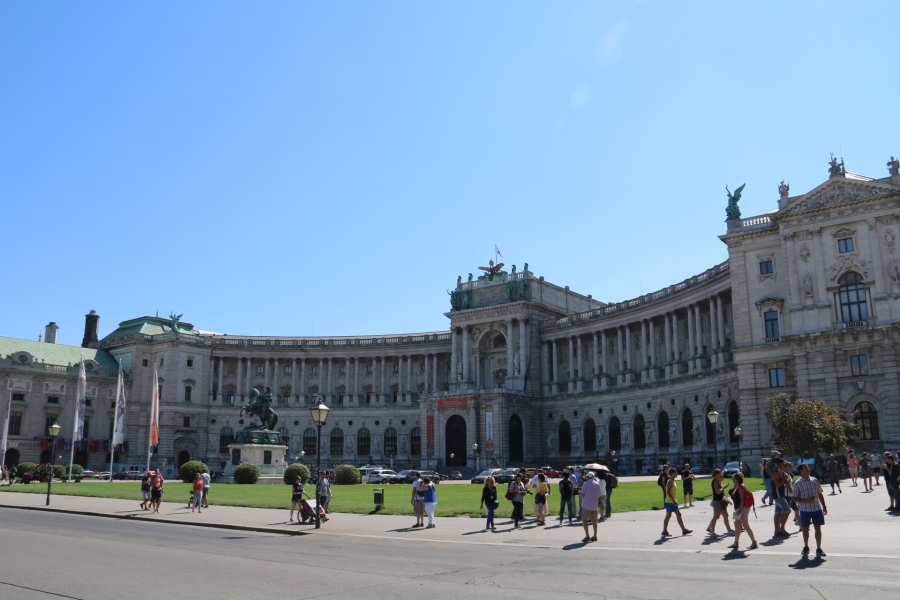 Here we are, city #3 and we’re already on the move again tomorrow! This is certainly a fast paced way to travel, and not the kind of travel that we do often; but we only had a certain amount of time and we wanted to cram as much into it as we could! So, cram we did.

We arrived yesterday evening, stepping off the second class Czech bus that took us 5 hours from Prague to Vienna. We hopped on the subway and after a few stops and a transfer, we were off again and meeting our host for our Airbnb stay. There she was, waiting at the station for us….with a chihuahua!!!! We are becoming obsessed with Airbnb, we’ve only had amazing experiences with it. It seems that every person we stay with has some sort of connection to travel, and that obviously resonates with us. It’s like our own little community where these people are welcoming us into their homes, and they totally get it….they can sit and chat for hours with us because they are interested, and want to hear our stories and experiences. Maybe someday Robin and I can give back to the Airbnb community and be hosts someday for people like us!!
Anyway….we enjoyed a nice cold beer with our host Mariela and Princessa the chihuahua. We went out for dinner to a reaturant that Mariela suggested, a cheap (ish) place with local food!! We were greeted by a grumpy waiter, which we are told is the custom here. The grumpier, the better. There was no English to be found on the menu, but as soon as I saw “schnitzel”, I was in the clear. We each ordered a beer and some Austrian style chicken schnitzel, and that came with a potato and cucumber salad; also an Austrian dish.

We knew that it would be a little more expensive here in Vienna, but it was actually even more expensive than we thought. We only had one meal out at a restaurant during our stay here because of this. It’s much cheaper to buy some food at the grocery store, and when you have the opportunity to use a kitchen in an apartment then you might as well use it!

Even when travelling though, we never stray from starting our mornings with bacon and eggs. 🙂

This morning was the beginning of our one full day here in Vienna, so we started it off with making and plan of how we would see everything that we possibly could. We had a map in our room that suggested a good walking tour of the city, and then we added in a few things ourselves.

There are so many massive historic buildings here in Vienna, most of them built with the same colored huge white stones, and statues adorning them. First up we saw the City hall. This is where the biggest Christmas market on Vienna is hosted every year. Then, the Parliament building; where a walking tour through the whole building is an estimated 13km distance, (but we couldn’t afford that so you won’t hear about it from me). 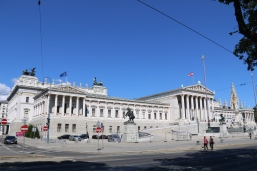 We saw a few more massive buildings: the State Opera, The Imperial Treasury and the Imperial Palace, the former residence of the Habsburg emperors. 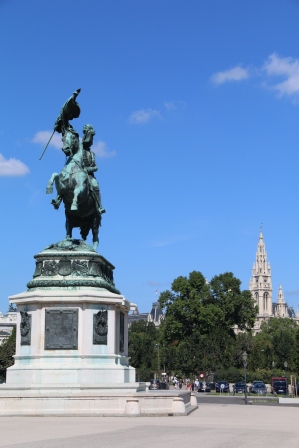 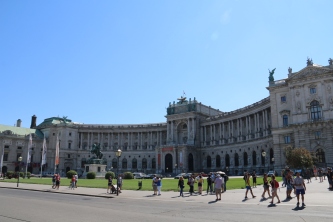 We also saw St. Stephans Cathedral, or Stephansdom, a beautiful and intricate cathedral which is the is the mother church of the Romans Catholic Archdiocese of Vienna.

We found the Hundertwasserhaus, which is an apartment building that has become a landmark of the city. It was built after the idea of a famous artist here. That was really cool to see, one of our favorite things actually!

Also in the map, we were told that there was a big bizarre painting of a cow playing a board game on the side of a building, painted in the 17th century. Robin was really excited to see it, but when we finally found it, it was almost completely covered up! But we did see the best bit I guess.

As we strolled though Vienna, I kind of felt underwhelmed. At first I was wondering if it was because we are doing this too fast, we’re not giving these cities enough time to make an impression and we’re not seeing everything properly. But- Robin also mentioned that he thought it was a nice city, but he just didn’t get that that “wow” feeling.  This could also be because we both really loved Prague, so that city is still lingering in the back of our minds.

Nonetheless, we still thought Vienna was very beautiful, the few people that we met were wonderful. In the middle of the day, we were standing at a stop light waiting to cross the road, and there were some people standing on the cross trying to sell bus tickets for a city tour. One of the men came up to Robin and I and sparked up a conversation, and my first reaction was “ugh, not interested!” He had seen Robins tattoo that says World Traveller, and he asked about it. From there, we got into a 15 minute conversation about travelling. He told us about his favorite places and were curious about ours, had his phone out showing us photos and was genuinely interested. At the end, he just shook our hands and said it was so nice to meet us, and we went on our way. I know we were both expecting him to ask if we wanted to pay for a bus ticket for a city tour, but he didn’t! That was pretty cool, after all of the people we’ve seen over the few years and said no to a million times, that was pretty refreshing.

We finished off our stay here with buying some beers in the store and coming back to our little sanctuary and chit chatting about the city, and did some planning for the upcoming ones.

We say goodbye to another Airbnb host that we will not soon forget, and to a city that maybe someday we will come back and spend more time and really fall in love with.

As for now, time to get ready for the next one. Only an hour bus ride will take us to the next country, and we will do it all over again. 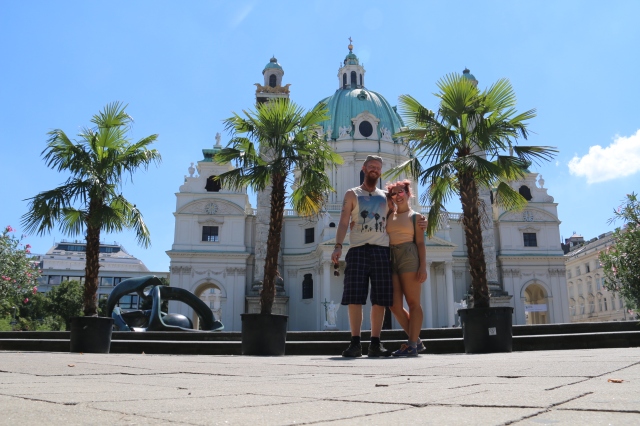