We’re in Transylvania! Transylvania which I’ve heard and read so much about. Good old stories and movies with blood sucking vampires always leading back to Transylvania. This will be fun. Our original plan was to go to directly to Bucharest and do day trips from there… But you don’t want to do that! You want to stop in Brasov! Beautiful Brasov laying in the middle of everything you want to see on a few days trip in the middle of Romania. We have talked with quite a few travelers while travelling down central Europe, and many of them either started or finished their trip in Budapest, avoiding Romania. Big mistake! One guy said it was because of the hassle with buses and trains in Romania. I’d dare to say that is bullshit, and if you have read blogs or reviews about lots of thefts on public transport in Romania (we had) I’d say that is bullshit too… At least nothing more than anywhere else. So far, Romania has truly shown us what a beautiful country it is. And regarding the public transport… You can easily book international and domestic trains on http://www.cfrcalatori.ro, or a bus ticket on the bus as anywhere else. We took the train from Budapest to Brasov. It took 15 hours, but with a good book, a few beers, a bottle of wine, and some episodes of House of Cards on the phone (yes there are power plugs) and we were suddenly there. 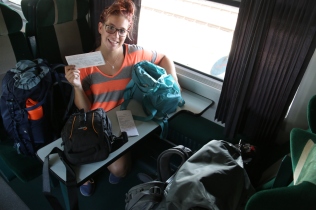 Again, it was pretty neat reading Transylvania as our destination on the train station in Budapest! We took the day train and arrived 12 at night. As we approached Brasov, we could see the name written along the hillside far over the city. 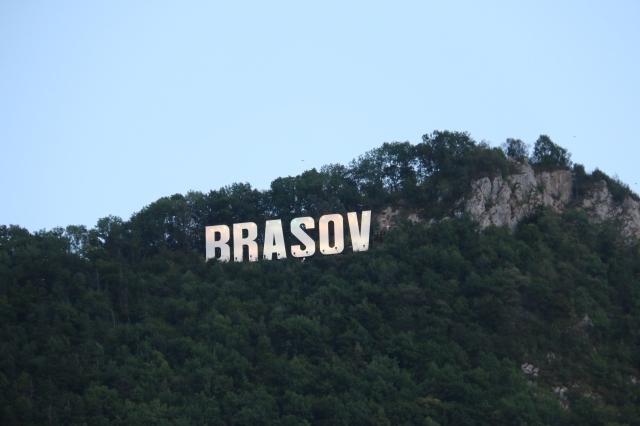 Now we know where Hollywood got that idea!

After a good night sleep in our Airbnb apartment (that we got cheaper than a hostel bed) we decided to go for a day trip to Sinaia and visit Peles Castle. 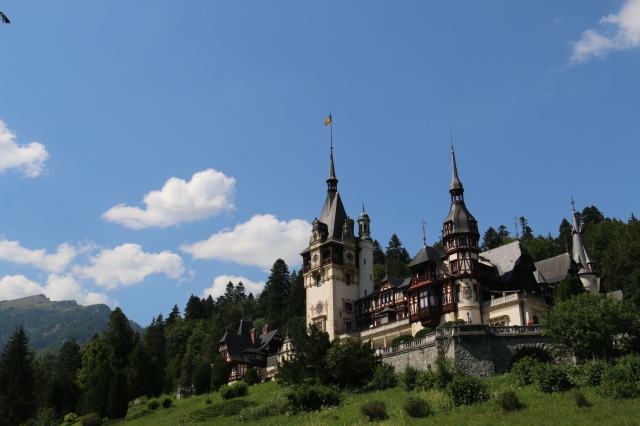 We topk the train, which took us about an hour. Sinaia is a great little place, off the beaten track full of local people by the look of it.

There were obviously some tourists as well, but not bad. Maybe except inside the castle. It costed $10 dollars p/p to enter, and unless you are very interested it is probably not worth it. I reckon seeing the castle and the surroundings from outside were what made our trip. Again, we are always catching ourselves saying that whenever we are paying to go inside somewhere, it’s not worth it…with a few exceptions! We loved the style inside though! And the castle holds a weapon collection of 4000 pieces. Lots of old weird looking goodies. 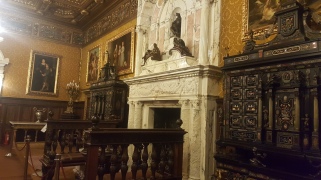 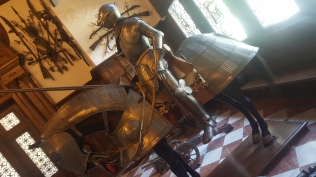 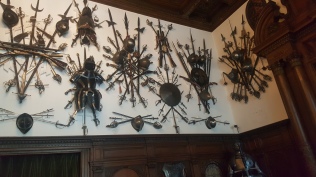 Peles Castle, the summer resident of the Romanian royalty was completed in 1883. It covers an area over 3200 sqm, and has 160 rooms in total. Apparently only 35% of this is open to the public. It’s a magnificent castle. We highly recommend a visit to both Sinaia and Peles castle! 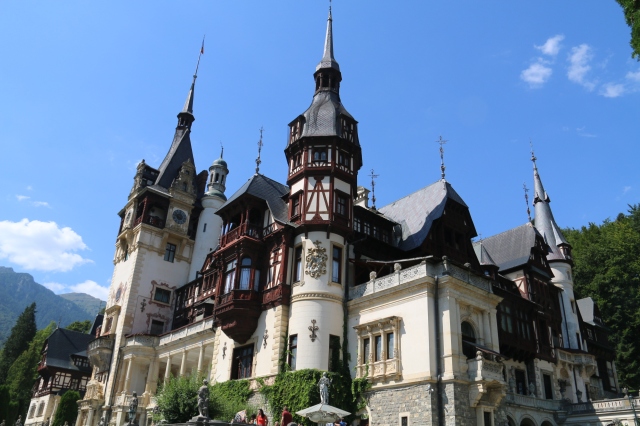 And a picture of us at the end to show that we really were there… Haha! 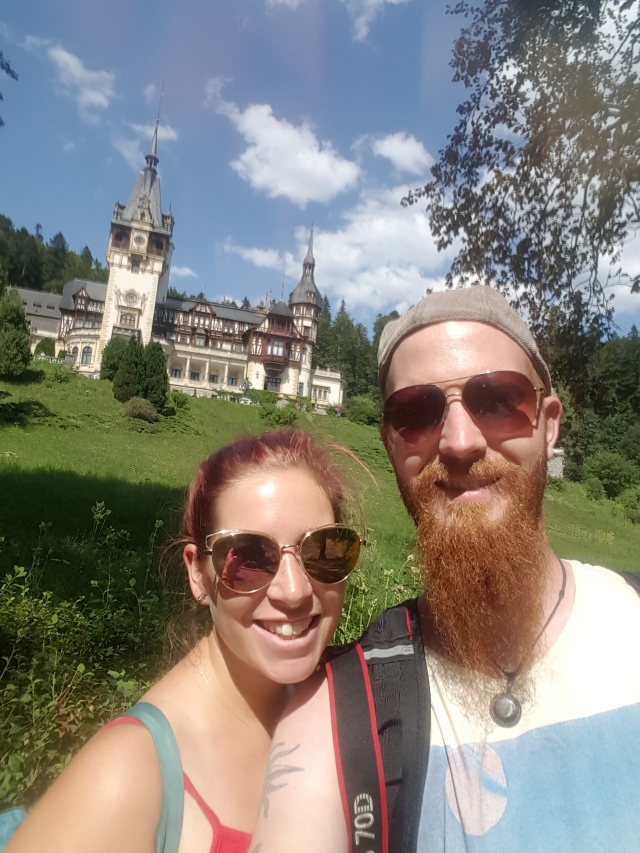 Next day we had more castles on the agenda! First up, the fierce, the mysterious, the scary home of Dracula! Bran Castle! Now there is a lot of meanings about whether this actually  is Dracula’s castle. This is because Bran castle is the only castle in Transylvania that fits Bram Stokers description of Dracula’s castle (a man that apparently never visited Romania in the first place) and therefore is known throughout the world as Dracula’s castle. There’s a lot more to it than that as well, I personally love how we’re discussing whether this was Draculas castle and not whether Dracula actually exists.. From what we had heard this castle has been turned into a massive tourist attraction, and we had not heard wrong. We were there two hours before it opened, not going on a tour, but taking the local bus, which I again highly recommend. When we got off the bus, everyone turned right, so we went left… Following the crowd has rarely any benefits.. We could see the castle, but not up close. A fence was between us and the castle. We kinda followed the road around it, to see if we could get a view from the other side, and suddenly there was an open gate…

We went inside, followed the road up, and suddenly we were there, right at the castles main door. And there he was! Count Dracula!… Nah just kidding. There were only a couple people there. We knew it didn’t open for a couple of hours, and we had no intentions of going inside anyway so we followed the road down in front of the castle. We figured we could explore the area outside before it got crowded with tourists… At the bottom of the hill we saw another gate, closed, and this was where all the people were…behind the gate. 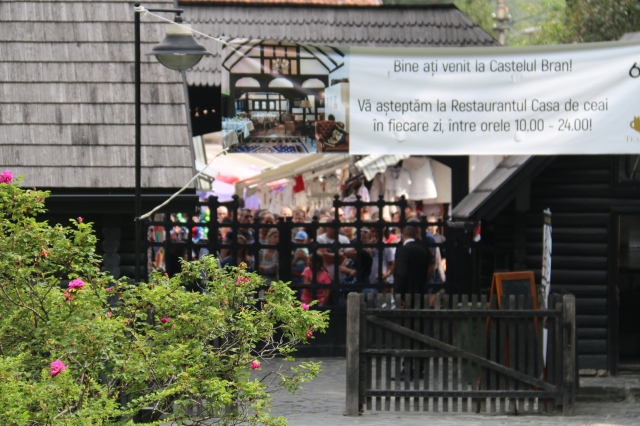 I mean, a lot of people… We walked up in front of the castle and took a few pictures, wondering why more people didn’t use the way we did… 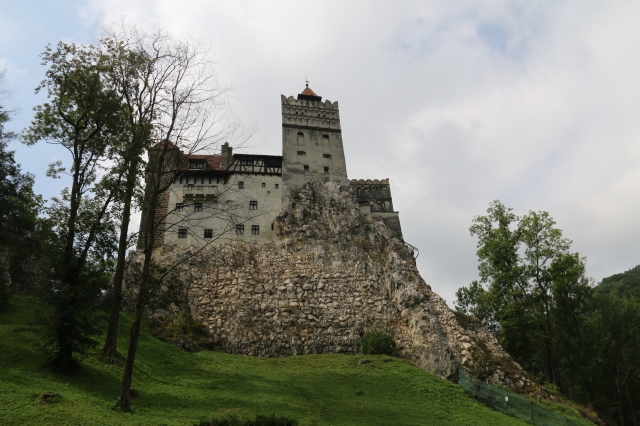 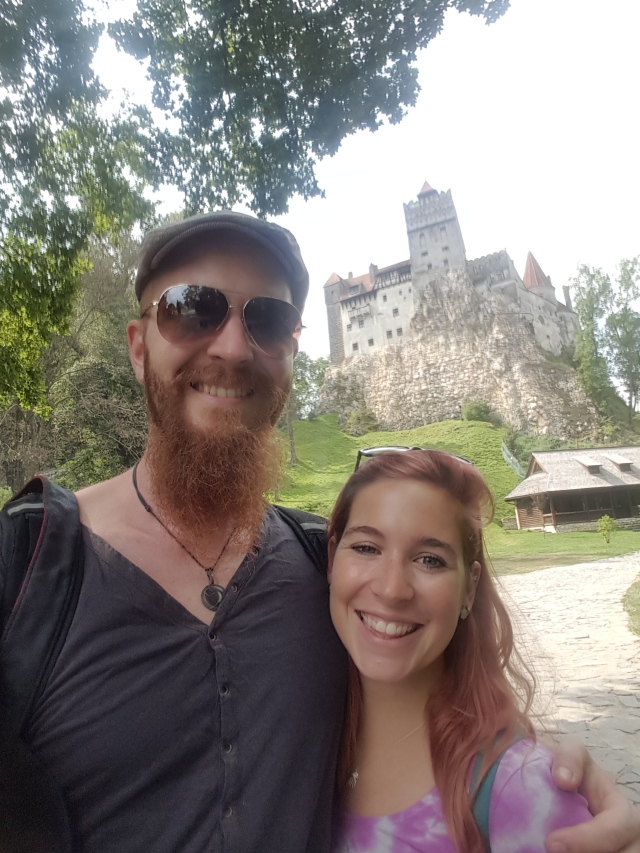 We enjoyed the moment alone in probably one of Romania’s busiest tourist attractions, until completely out of the blue, this guard approached us… He looked very confused and asked how we got in. I kinda wanted to say I’m the owner of this place and we used the secret passage, which we more or less did. He told us that the place didn’t open for another hour and that we had to leave immediately. It was quite funny, and we were happy. We got to enjoy the castle more or less alone, and even in good faith! It doesn’t stop here though… We’re always looking for high grounds to get good scenic pictures. And did we find one, also without a single tourist… 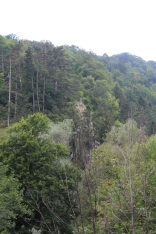 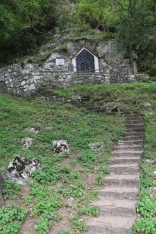 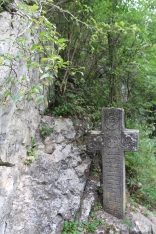 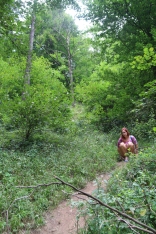 Where you can see the cross in the picture is across the valley from the castle, and that’s the carrot of the entire visit. The walk up there is steep and a bit bumpy but not long. Probably 5-10 min. And is it worth it, YES!!! 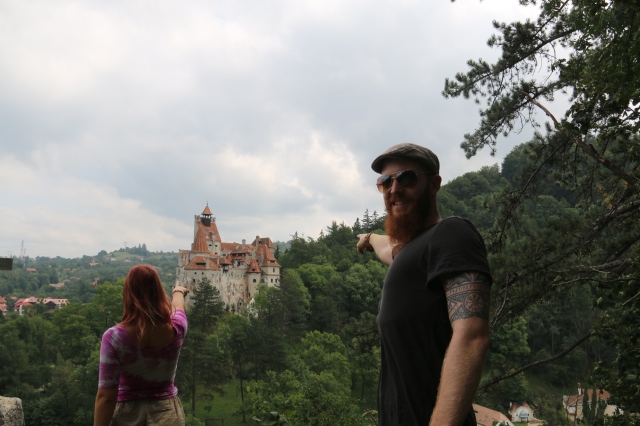 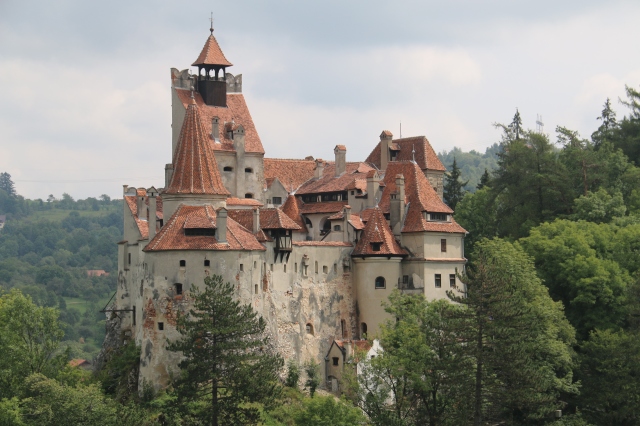 I think it was a great castle to see, and can frankly not say anything about the tourists because we bypassed all that. When the time was 12pm and they finally started to let a few people inside from a line already reaching hundreds of meters… Well then we were already on the bus for Rasnov fortress, our next goal for the day! 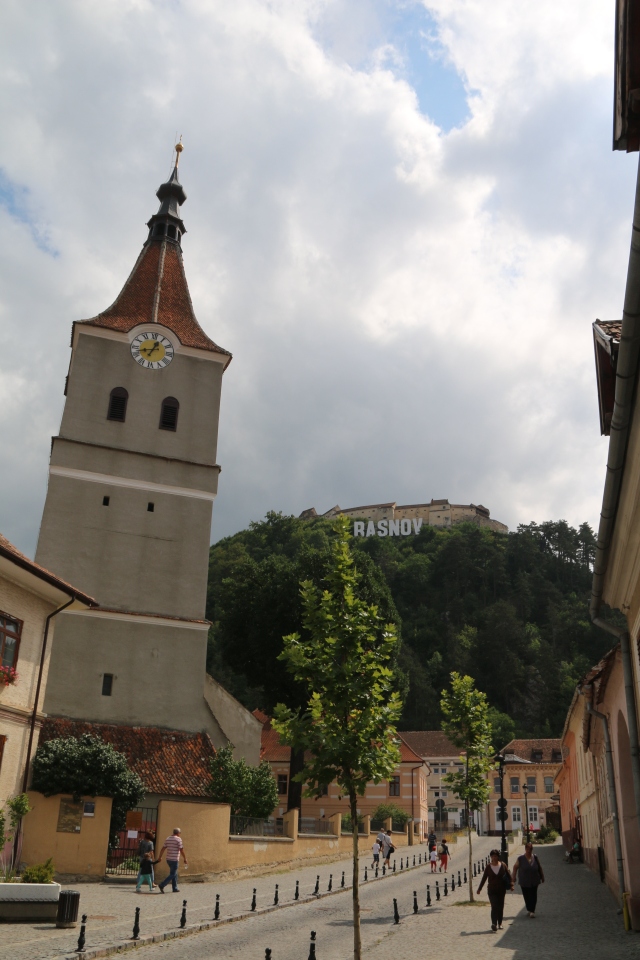 We arrived with the local bus and can you believe it, they also have their own sign. There is a cable car up front but we followed the road up behind the fortress. We didn’t mind the walk and we saved the money. On the way we even stumbled upon a Dino Park. 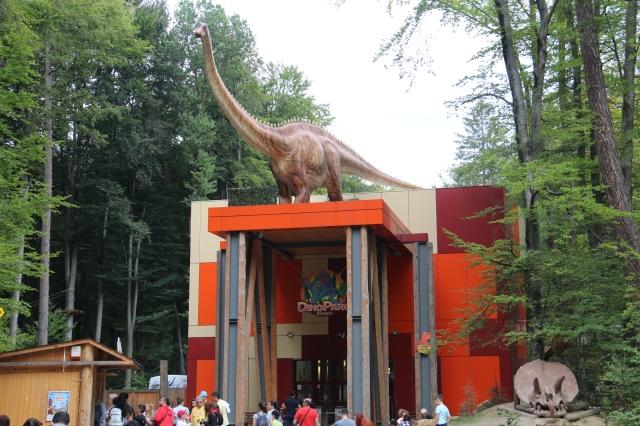 Anyways. Rasnov Fortress is truly a place to visit, especially if you are fond of ruins, and exploring them basically without guidelines. 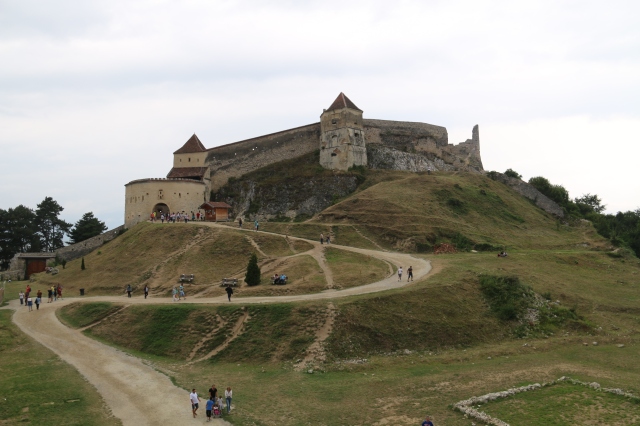 Not many tourists as you can see probably because they’re all in line at Brans… And it only costed 12 lei (24nok/$4NZ) to get in. That is 1/3 of the price that they were taking at the other castles. 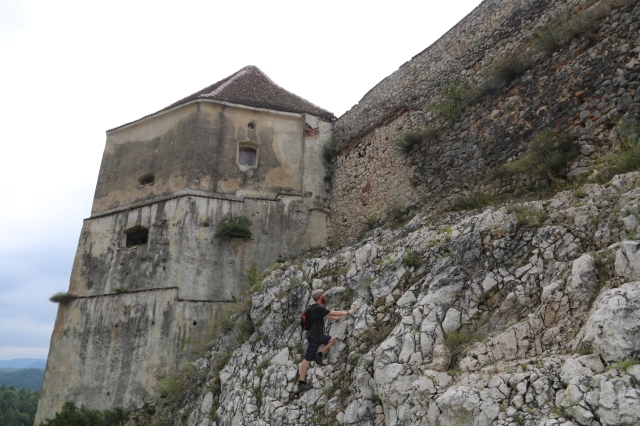 We were able to explore it freely, which you can see I took full advantage of! 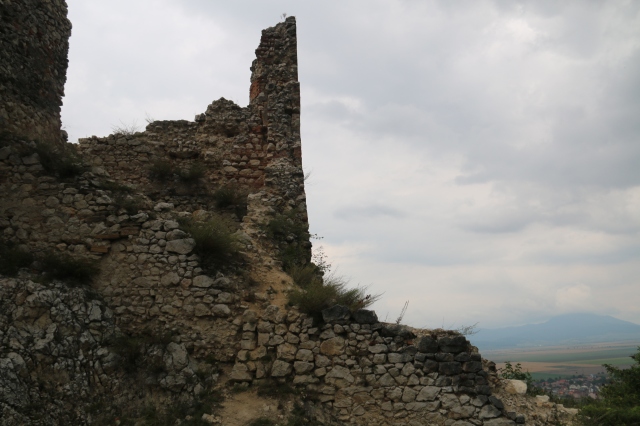 It was in pretty rough shape, but it’s always neat to see something in original ruins. Parts of it had been restored, and some parts were still in very good shape. 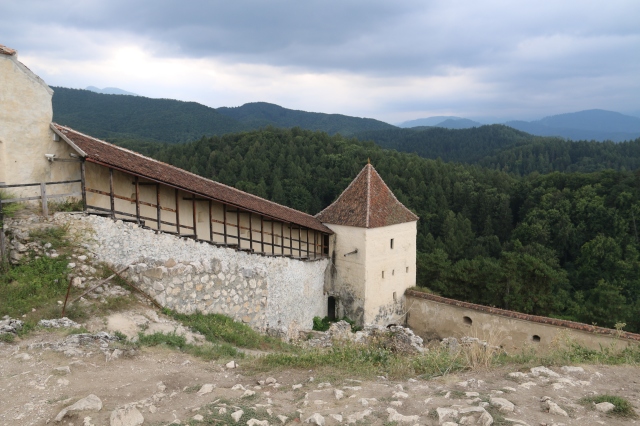 There’s also tonnes of history surrounding this place but that will have to be in another post (or a google search for you). 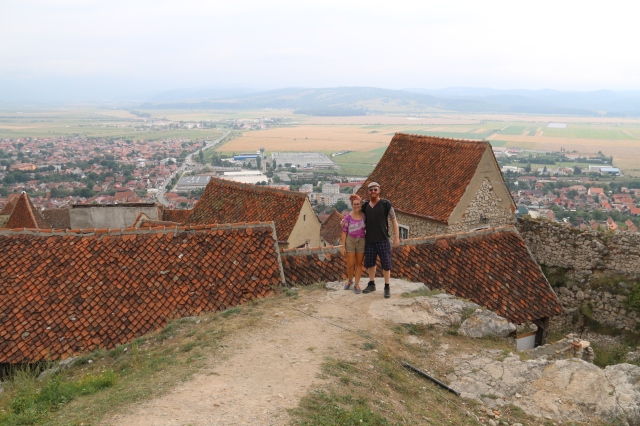 The view was amazing, and you could really see the strategic position of the fortress over looking the flats. 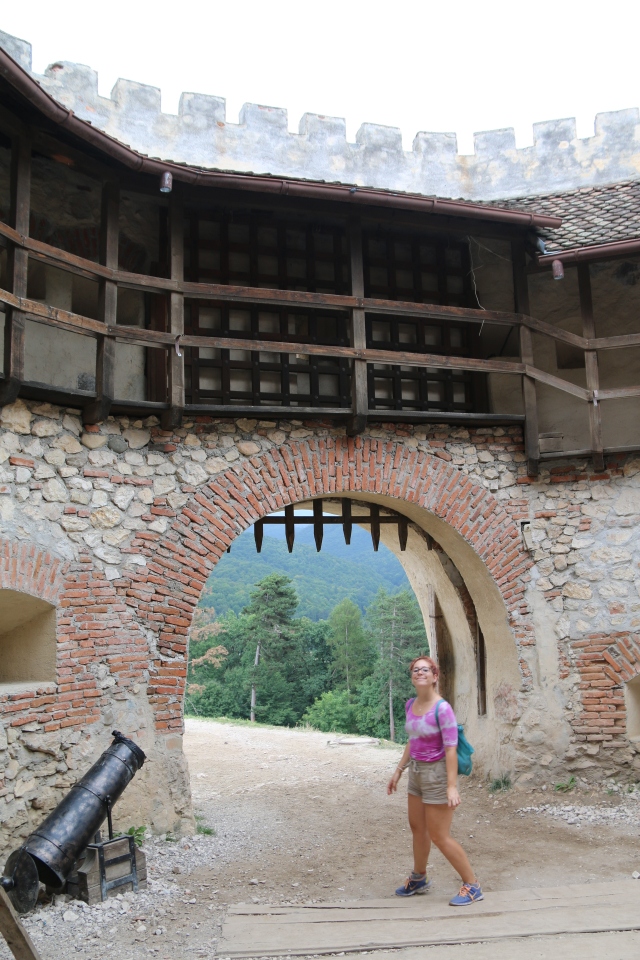 Sarah is doing a bit of posing as you must! Overall we had a pretty amazing day avoiding the crowds,  still saw what we wanted,  and everything you have seen, we did for 54 lei (110nok/$19NZ) Two people including transport!

Much more could have been written, but time to post. We love Transylvania. This place is truly magnificent! 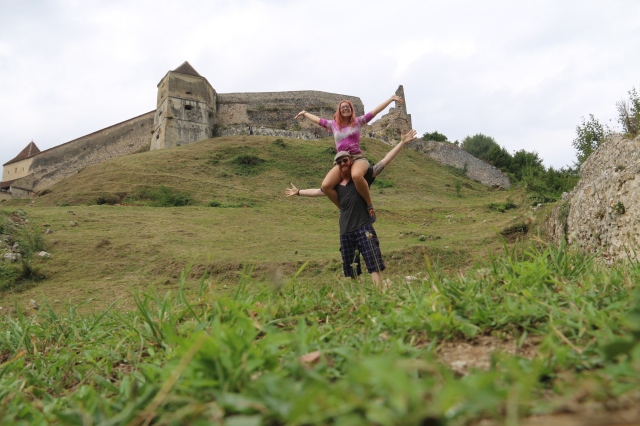