Farm School was the best thing for me to stumble upon when I arrived in Australia. My friend and I, who I went to Australia with, just happened to find ourselves in the hostel bar where there was a farmer (as well as other employers) doing a presentation and telling us new backpackers why we should come to his farm school. To be honest, I didn’t really think much of it to begin with, because lets face it, I am nowhere near farmer material….well thats what I thought at the time. But he must have been a damn good speaker because my friend and I decided to sign up immediately. The reasons were as follows:

1) it was four weeks long, that meant four weeks of guaranteed accommodations we knew we’d have a place to sleep for a whole month.

2) meals were included in the cost…pretty self explanatory, we didn’t have to worry about buying food or (God forbid) making it.

3) during those four weeks, we (along with eight other backpackers) would learn what it takes to work on an Australian Farm – what to expect, how to build a fence, how to work legally etc. etc.

4) and most importantly, we were GUARANTEED a job after we finished with the four weeks.

I was initially undecided until they brought up the last point. We’d be guaranteed a job. Yep! Sign me up!

Now, to enter Australia you need proof that you have at least $5000 Australian in your account, so I had that. The farm school would cost us $1200 in total. That was a lot of money- and we got a HUGE deal on it because we were the guinea pigs, the first group to ever do it at this farm. But I knew I would need a job ASAP and I knew I sure wasn’t going to get one on a farm without taking this course. So 2 weeks later I hopped on a train with 6 other backpackers on the way to Bundella, New South Wales. This is where mine and Robins story together begins. We lived in a house with nine others. Eight backpackers, and one English guy who was a permanent worker there, in the process of getting sponsored. We had teachers, a cook, and lots and LOTS of sheep to learn about.

And so, we began the school. On the first day we had a lesson about first aid. None of the normal things that I, a North-American, would expect at a first aid course. No CPR, no splinting a broken bone….no. It was all about how not to die if you get bitten by a spider or snake. Oh goody. That was when it really sank in that I was indeed in a poisonous snake and spider infested country. So we got through that and into the good ol’ farmin’.

We kind of had different “subjects”, if you will. Fence building, stock handling, 4-wheel driving, motorbike riding (which I had a little accident in…more on that later), lamb marking, simple farm vehicle maintenance, horse back riding, and a few other things.

In week one we marked 793 lambs, learned some about stock handling, and learned about fence maintenance; how to tie a knot in wire and fix broken wires and posts.

Week two was learning to drive a manual vehicle. I had never driven a manual before and frankly, when I was living at home in Canada, I told myself I’d never have to learn how to drive one. In all honesty I was just a wimp but I had no choice once I got to Australia, so I learned…..after some time. Also week two was vehicle maintenance: changing tires, checking the basics, making sure you’re not burning the clutch of your boss’s ute. (Ute = utility vehicle. Just a pickup truck) We also starting building a fence in week two, an 850m (2788ft) long electric fence from scratch. That job would take us until the last couple days at the school to finish.

Week three was learning how to ride horses and drive four-wheelers and motorbikes. That was supposed to be the “fun week”. I found it extremely fun up until I drove my tiny little motorbike directly into a barbed wire fence. I stopped having fun about the time I hit my face on the handle bars, cut my wrists and stomach and ripped my two shirts I was wearing in half. Oh and also when I had to embarrassingly watch other people have to use wire cutters to get the bike out of the fence. It’s hilarious to look back on now because seriously…..who does that??? Good times…but luckily I got the sympathy card and was allowed to pick the next weekend group meal. Being the extremely talented and adventurous cook I am…..I chose tomato soup and grilled cheese sandwiches. You’re welcome everyone.

Week four was finishing up the fence, and lots of stock handling. At the beginning of week one, we were the whole group of 10 herding a small mob of 50 sheep from one paddock to another. By the end of week four, we were a group of three herding a mob of 1200 sheep from their paddock, down the driveway, and into a set of yards. Then we drafted them, (divided them into 3 separate groups) drenched them (used a device to give them medicine orally) and herded them back into their original paddock. So that was pretty impressive. Robin and I were in a group together with one other girl from Germany and we did really well.

In week four we also all found out which job we were being assigned! By the end of the program, the teachers/farm owners knew us all well enough to place us at different farms based on our skills and personalities. My friend and I were placed on a sheep and cattle farm that was not too far away from the farm school, in Coolah, New South Wales. Robin was chosen to be a Combine Harvester Driver. He was introduced to his new employers as well.

We left the farm school excited to start a new paying job, but also very sad to say goodbye to all of our friends we made in the house. I found it especially hard to say goodbye to Robin, who I knew I wouldn’t get to see for at least 3 months…not knowing if we would ever actually see each other again. (Spoiler alert…..we did.)
And so, that was the farm school. Best decision I made when arriving in Australia, and something I would encourage every new traveler to do. Being able to experience the real work, meeting the locals and learning about a new country is really the way to see it. Not just arriving in the capital city and going on a couple of tours. This was the beginning of two amazing years in an amazing country. 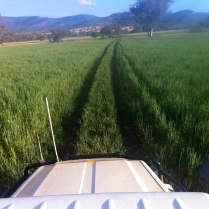